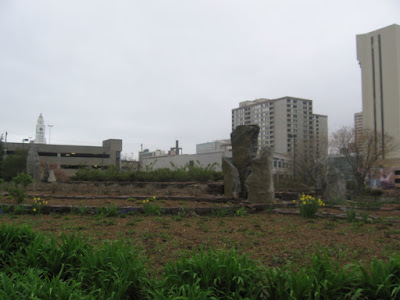 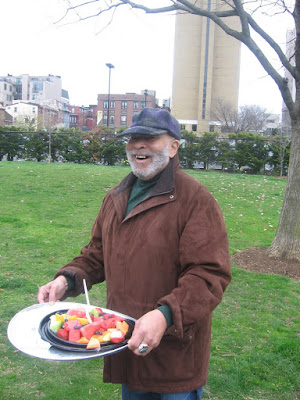 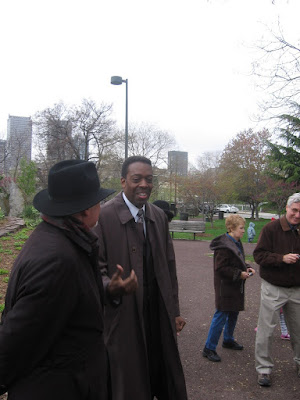 MATTHIAS BADLWIN WAS A VERY NICE MAN
Will the City--and his so-called friends-- uphold that legacy?

On an unseasonably cold and windy April 16th Saturday morning in a small park formerly known as Franklintown at 19th and Hamilton Streets, a group of people gathered. The small crowd chatted while periodically checking their watches for the arrival of City Councilman Darrell L. Clarke for the big event: the renaming of the park to the Matthias Baldwin Park.

The name change had been in the works for years. The idea was first proposed in an email from Mel Seligsohn, co-chair of Friends of Matthias Baldwin Park, to City Redevelopment Planner, Rick Shnitzler in December of 2007. Emails generally go nowhere but this one caught fire—a slow fire but name changes take time.

The park itself was the creation of Athena Tacha after its commission by the Philadelphia Redevelopment Authority and the Franklintown Corporation in the 1980s.

Who was Matthias Baldwin?

For starters, he was a benevolent businessman, often an oxymoron in today's world.


He was also the founder of the Baldwin Locomotive Works, the sprawling 8-city block industry that occupied the area from Broad Street to 18th Street and then from Spring Garden Street to the Reading Railroad tracks. This cramped 196-acre “field” was the Silicon Valley of its day.

In 1831, Baldwin built a small solitary engine that led to the development of the steam engine that in turn led to the locomotive that ran on tracks from Philadelphia into Germantown and Norristown. The company employed thousands of men in the city before its move to Eddystone.

“It’s rare to name a park after a business person,” Friends of Matthias Baldwin member Mrs. Sandy Owens told the crowd. “Most parks are named after poets, beloved American presidents and musicians, but rarely after a famous businessman, but that’s our mane today.

Unfortunately, there were no signs of life in or around the Tivoli, the handsome but somehow ghostly looking apartment complex bordering the park. A friend informed me that its primary occupants, hipsters and yuppies with dogs, were probably still asleep in their digs, unaware that their favorite doggie park was undergoing a name change. One would think, naturally, that such an event would be a draw, and that the couples would exit en masse, doggie in tow, to take a peek, but that was not the case. We were left wondering if any of them were viewing the proceedings, knee deep in coffee and laptops, from the upper story windows.

Had they ventured out they would have heard Seamus Kearney, key organizer of the event and co-founder of the Friends of Matthias Baldwin, recite the Baldwin-disappearance mantra.

“His great house on the banks of the Delaware, gone
His factor disappeared
The company he founded no longer in existence
The school named for him now demolished
And a statue of him situated in a little visited nook in City Hall!”

But we will, Kearney promised, “revive the memory of Matthias Baldwin and his deeds.”

When at last the ever gracious Mr. Clarke spoke, he apologized for being late although nobody was holding him to it.

More chuckles from the crowd as the wind kicked in, blowing the paper plates set nearby for the donated fresh fruit from a nearby deli called Fretters.

“It may be a little fancy, but it’s no less a park than what you guys have here,” Clarke said he told the Northern Liberties folks.

“Actually, I thought this was going to be much more of a challenge,” Clarke confessed. I thought at first—Franklin Town? That’s a significant name. Franklin? Em, been around for a while. Well, we contacted the park, and they went to work with the Friends group here and they got on the case!”

As great as Ben Franklin was, the city can survive with one less park named Franklin.

At the sign’s unveiling there was a robust round of applause, and immediately after this came a gust of wind I can only describe as “locomotive.”


---The absence of the mainstream press at the event was discouraging. Only The Weekly Press showed up. For that The Weekly Press should receive a special citation. The reality is, they received the opposite from the very people who shuld have been more "Baldwin-like."
Posted by Thom Nickels at 1:28 PM